We have all done it; made promises to our kids that maybe we wouldn’t be able to keep. Promising the boys that we would go sledding before the end of the winter break was not really a risky promise. I mean, we were supposed to get some snow, and if nothing else I could hit up the local ski hills and pay to get them some snow time. Of course the last time I took the boys sledding their were two of us carting my youngest up and down the hill and now, as a single father, it would just be me, so driving to the ski hill and paying for passes would not be ideal if I could only last an hour or so carrying his 60 lbs body up icy slopes…

…And wouldn’t you know it, we did not get the snow and with only about 5 days left of winter break along comes my oldest asking “So, when are we going sledding?” I saw his excitement and I started to get excited and before I knew it we had made a plan to go sledding the next day.

We packed up our gear, through our sleds into Darth Vander (that’s the name of my van) and headed for Mount Seymour. When we got up there it was 5 degrees Celsius (41 Fahrenheit – a friend recently asked me to translate). This is warm enough for just enough melt to make things super icy.

As my oldest began to climb up beside the run it became clear that this was not going to be easy. Adults and kids were slip sliding all over the place while trying to scramble to the top. Kids falling to their knees and sliding back down, rogue sleds taking people out at the ankles, adults trying desperately not to fall on their children while dragging them up the hill by their hands, wrists, arms, jackets…

My oldest slipped a couple times but didn’t seem to mind and made it without too much issue. I had decided to pull my youngest up in his sled, but with the ice and his weight it was difficult to get the traction (why didn’t I bring my micro-spikes?!?!?). So, taking a page out of the desperation playbook I decided that he was going to walk up the hill on his own.

Again, he blew me away. He must of climbed that hill 20 times. Yes, it was slow, but his steps were deliberate and sure and he didn’t fall once! He would slip and put his hands down, straighten himself up, and keep on truckin’ his brother encouraging him with “Come on buddy, good job!” As we slid down he giggled with the cold wind blowing in his face, and at the bottom, roll out of the sled to start heading up again. 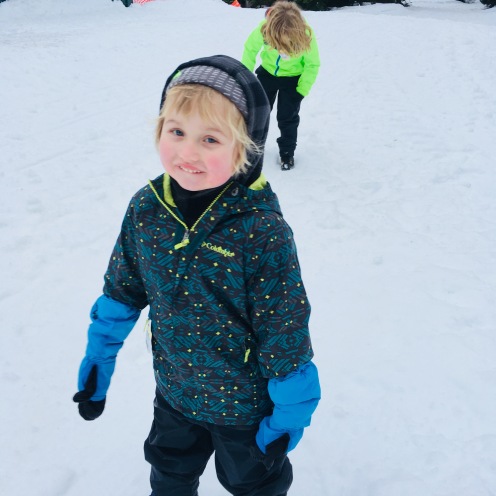 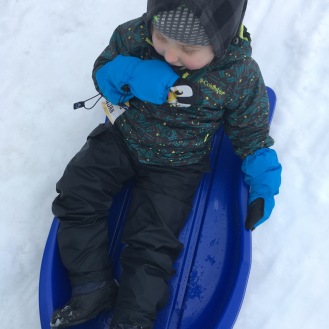 We were on the hill for two and half hours, climbing up and sliding down. In the end it was me who had to call it a day. They were still dry and warm, maybe a little sweaty, and did not want to stop, but the mention of hot chocolate and a cookie had them following me in. It was a great day full of laughter, smiles and surprises. We will definitely be heading up again. Or maybe it could just snow down here… that would work too 😉