Today’s post will be a little different. Yes, I will tell you all about the trail; however, I also need to write about how my boys taught me a very important lesson.

First of all Crystal Falls is located in Coquitlam, B.C. You could live in the area and never know that this trail exists. There is an unmarked trailhead right at the end of Shaunessy St. where it runs into Karley Cres. This hike is definitely not wheelchair or stroller accessible, but with a little bit of attention the City of Coquitlam could turn this 7km roundtrip hike into an amazing and accessible trail. At least two thirds of the trail is flat and wide and already wheelchair and stroller ready. The other third is narrow, rock and root covered with small streams crossing at three or four points. This would be easily remedied with a couple of small boardwalks or bridges, some clearing, and packed gravel. All that being said, if you don’t need a wheelchair or a stroller this hike is perfect for children. There is basically no elevation and the trail follows the Coquitlam River for the majority of the hike. At the end of the trail you run into the small but stunning “Crystal Falls”. This is a great place to have a snack, take some photos, and explore a little before heading back. 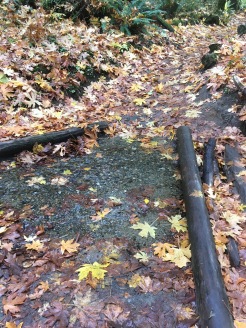 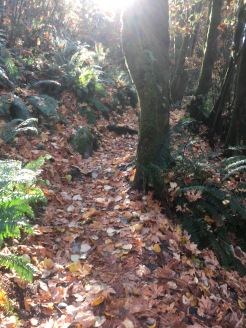 But this day was not memorable because of the hike. As a single father of a special needs child I run into my fair share of challenges. One that has always bothered me is people placing limits on my son. Now I know all parents probably run into this; however, it happens a lot when your child is not “typical”. On one occasion I was having a discussion with a doctor who told me that my son would never feed himself. I told that doctor that he could already feed himself and when the doctor told me that I was wrong I dumped a small handful of cheerios and raisins on the table and my son began to pick through and eat only the raisins. The doctor told me that “he should not be able to do that”. See not only was he feeding himself but he was choosing to eat the raisins first because they were his favourite… he did eat the Cheerios later because… Food 🙂 The doctor cared more about what my son should not be able to do and less about what he could do.

Today I found myself doing the limiting. We had driven out to the trail head and unpacked the van, including the stroller. I had watched a couple videos about the trail, looked at images, and did my research. I believed that I could get the stroller down the trail; boy was I wrong. We got about 400m when I realized that this was not going to happen. I looked at my oldest boy and told him that we needed to head back, in my head I had already quit. I knew that physically I was capable of carrying my youngest son on my shoulders, all 57 lbs of him, but last time I did it I sprained my back pretty badly. Although I have been working on strengthening my core and legs (because he ain’t getting any smaller) I was not comfortable with carrying him 7km. I did not want to disappoint my boys but I didn’t feel I had a choice.

As I loaded the stroller back in the van my oldest son looked at me and said “I think he can do this”. He was referring to my youngest and that’s when it hit me.

I had limited my youngest son.

I had allowed my own anxieties and fears to get in the way of allowing him to try. My 8 year old had more confidence in our collective abilities than I did. “We can do this,” he said “I’ll help you”. I was all kinds of emotions at this point. I was angry at myself for giving up so easily, I was proud of my oldest for his eagerness to try, and I was sad for my youngest because I hadn’t given him the chance to show us what he was capable of.

And, as cliché as it sounds, it was then I remembered that it isn’t about the destination, it’s about the journey. My 8 year old knew that. He knew that it was about being together, outside, exploring, adventuring, learning.

So we went for it… 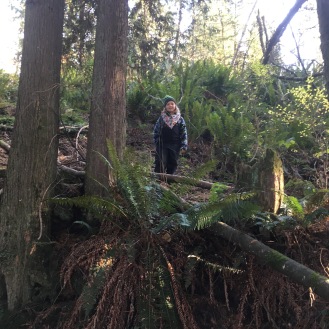 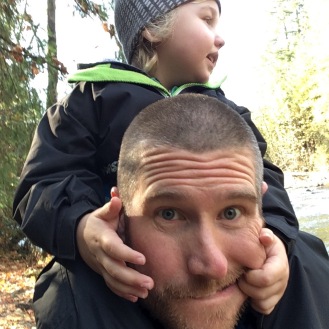 My youngest son, who only learned to walk a little over a year ago, walked four and half of the seven kilometres. I would carry him over the harder sections, through deeper mud and streams, but he did the rest. When I got tired my oldest would take his hand and guide him through roots and rocks hidden under leaves. We joked, made noise, laughed, sang about farts (we do this a lot – please don’t judge us). We made it all the way to the falls and back, but even if we didn’t make it to the falls it wouldn’t have mattered.

We took our time… and spent it together.

I am humbled. Not just by my oldest sons strength and wisdom, but by my youngest sons determination and resilience. Today they taught me a lesson. Thanks boys!

P.S. – Yes… of course we went and had donuts and hot chocolate afterwards. They earned it! 😉