This little adventure took place at the beginning of August. While we were having breakfast my oldest son started asking questions about Lighthouses. We had no big plans that day so I answered his questions with “Wanna go see one?!” he answered “YEAH!”

We finished breakfast, packed water and snacks and hit the road.

Lighthouse Park is located in West Vancouver. It is home to some huge old growth Western Red Cedars and Douglas Fir. How far is the hike? It’s really as far as you want it to be. Just take a look at the trail map and plan it out.  Lighthouse Park Trail Map

We had planned to do a loop that would be about 5 to 6 km down “Beacon Lane Trail” to the “Lighthouse Viewpoint”. From there we would head back to the “Valley Trail” to the “Arbutus Trail” and on to “Eagle Point”. After Eagle Point we would head up the “Valley of the Giants Trail” (Trees up to 500 years old) to “Maple Trail” then “Deer Fern Trail” and on to the “Salal Loop” and back to the parking lot.

It was no problem getting the stroller down to the Lighthouse lookout; however, it was downhill and pushing a wheelchair, with an older child or adult, back up the hill would be a workout. I had to carry my youngest up onto the rocky outcrop that serves as one of the viewpoints for the lighthouse.

We then went down to the lighthouse station, past the WWII barracks. The park has quite the history, including serving as a military defence base during WWII. There are history and information boards down by the barracks.

It was not until we tried to continue on the Valley trail and Arbutus trail that we ran into some trouble. About a third of the way onto the Valley trail it became apparent that the stroller was not going to be making it all the way. After a good attempt to force the stroller through some rough patches, large roots, and branches we decided to turn around and head back to the Beacon Lane Trail.

We weren’t done yet though. We headed back to the van, threw the stroller in the back, and began walking towards “Juniper Point” down “Juniper Point Trail” to get an amazing view over Howe sound. There were sections where I had to shoulder my son but we got through 🙂 I’m planning to come back, solo, to explore more of the trails and mark the ones on the map that could handle a stroller or wheelchair. 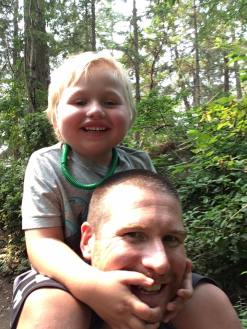